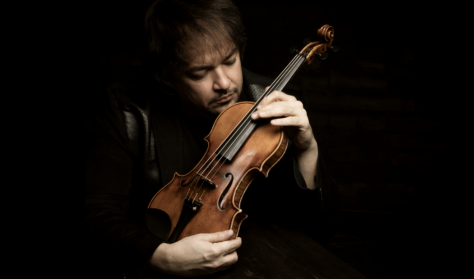 On this evening, almost everything and everyone is Italian.

THE MOODS OF ITALY

Except now and then you will find a “stowaway”. Though it is true that posterity has Cherubini down as a French composer, he was actually born in Tuscany. Mendelssohn’s Italian Symphony may have been written by a German composer, but the work almost bursts with the joy of Italy. And Sergei Krylov? Biographically speaking, he is Russian-born, but he is usually introduced as a “Russian and Italian” musician, and even plays a Stradivari. The concerto piece to be played in the middle of the show from Paganini, on the other hand, has no disguises: it is self-evidently and overwhelmingly Italian...

The fact that almost everything and everyone can be linked to Italy is owing to the conductor. Róbert Farkas was born in Ózd. After studying in Budapest, he completed his education in Berlin and enjoyed his first significant achievements in his career on German soil. He is currently the artistic director of the MÁV Symphony Orchestra. Born in Moscow, Sergei Krylov won a whole host of competitions at the start of his dizzying career before going on to play with most of the world’s most significant conductors. He first performed at Müpa Budapest as a soloist, playing Bartók’s Violin Concerto No. 2 with Zoltán Kocsis as conductor. After the performance, Kocsis told him that “Your Bartók speaks in Hungarian.”

Cherubini composed his most famous opera, Médée, in 1797, and its overture is the composer’s most-loved orchestral piece. Paganini wrote his Violin Concerto No. 4 in D minor in 1829 at the age of 47, 11 years before his death. The manuscript was lost for a long time, sov piece’s modern premiere only took place in 1954, in Paris. The Italian Symphony was inspired by Mendelssohn’s experiences in that country. Its world premiere took place in 1833. It is hard to believe, but the composer was dissatisfied with the piece, and refused to publish even the amended version in his lifetime.

What do Beethoven and Kodály have in common? The spontaneous response: both of them were supposedly born on December 16th.…

Making up the programme for this concert by the Hungarian National Philharmonic will be Polish and Czech masterpieces, compositions from…

Warning! The basket time limit is about to expire!