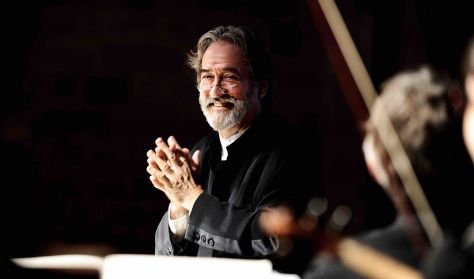 Jordi Savall, the legendary figure of early music compiled a program for the BFO spanning a century and a half and presenting the court music of the age of three monarchs, Louis XIII, Louis XIV and Louis XV. The compositions of two emblematic composers of 17th and 18th-century French music and their far less known colleague will be performed by the orchestra’s Baroque ensemble established in 2011 and playing period instruments. All the pieces were composed in honor of the king at the time. Dancing plays a significant role not only in the ballet music of Philidor the elder, but also in the operas (or rather opera-ballets) of Lully and Rameau. The central genre of the program, just like that of the era, is court ballet; the concert will feature a selection from the three “Louis records” of Jordi Savall released between 1999 and 2011.

Italian ballet reached France in the middle of the 16th century and became an aristocratic entertainment to the uppermost classes. Louis XIII and Louis XIV often participated in person in the performances of astonishing visual imagery, which cost a fortune. The former debuted as a dancer at the age of 16 when he informed her mother, who acted as his regent, through a piece rich in political innuendos that he was now ready to reign. André Danican Philidor, a descendant of a musicians’ family of Scottish origin, created an extensive collection of manuscripts as a music librarian and composer. From his ballet music movements composed for Louis XIII, pieces celebrating the child Louis, his coronation and his wedding, as well as two more compositions will be performed.

Although Louis XIII’s physique destined him to be a better dancer, and he was also an excellent musician and amateur composer, an even more glorious chapter in the history of ballet is related to his descendant. Louis XIV, also called the Sun King – the name itself came from a ballet role –, established the Royal Academy of Dance and the Royal Academy of Music. His court composer, Lully, acquired from him the monopoly of opera production, which he often used unfairly. The founder of French opera style performed his compositions annually. Alceste, a “tragédie en musique” celebrating the king’s victory over Franche-Comté was premiered in 1674, of course, with several dance movements.

Lully’s popularity was hard to surpass not only throughout his life, but also after his death. Although the relationship between the king and Rameau was looser, he was undoubtedly the greatest composer of the age of Louis XV. His opera entitled Naïs was composed on the occasion of the Treaty of Aachen ending the War of the Austrian Succession and, therefore, it is also linked to a victory. The opera with a pastoral theme was written in 1749 and includes several dance movements fashionable in the 18th century when ballet was still considered equal to the parts sung.